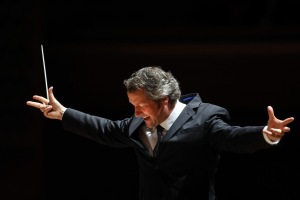 „The immediacy of the sound was obvious from the first tremolo of the opening movement, flung out vigorously by Markus Poschner. In such proximity, accuracy is of paramount importance, but it was never lacking, even in the tricky pauses of the opening bass and cello lines. Crystalline textures highlighted every detail of accompanying lines, shining light on subtleties such as a beautifully played horn and clarinet duet in the first movement. There was no compromise in the intense despair which punctuates the movement; the percussion section thundered, led by two timpanists playing on the hand-tuned Viennese calf-hide drums, and the wild col legno passage later on was utterly compelling.“